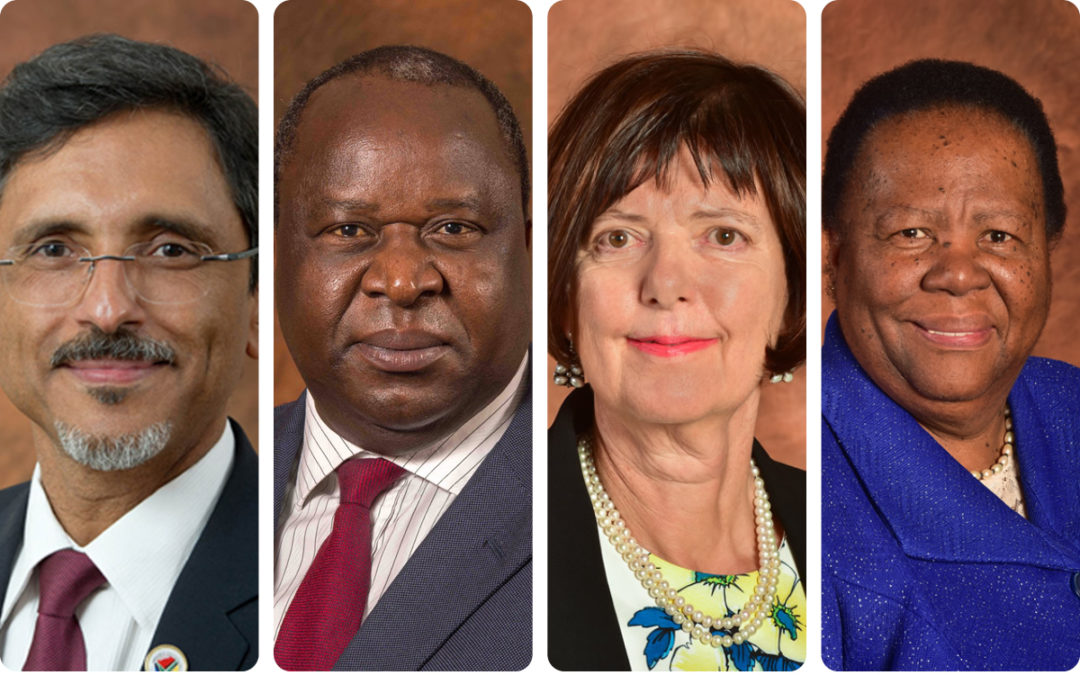 As South Africa faces down its third wave of the Coronavirus, the hard work of getting the country’s economy back on track requires input from various departments and members of President Cyril Ramaphosa’s Cabinet.

These four ministers are amongst those playing a key role in the governance of South Africa, implementing a policy that can help rebuild the economy and shape South Africa’s role on the global stage.

In the face of the global pandemic Trade, Industry and Competition Minister, Ebrahim Patel, has faced a challenging last 15 months. The pandemic and necessary restrictions on business activities required and resulted in an economic downturn that necessitated an active response from his department.

During the lockdown, the Department of Trade, Industry and Competition (DTIC) oversaw the registration of essential goods during the five-week Level 5 lockdown and was instrumental in having the competition commission act against companies overcharging for personal protective equipment.

Just one of the ways Minister Patel’s department has been encouraging local economic growth has been through the procurement of goods from local manufactures, to fight the Covid-19 pandemic. Global supply chains broke down during the initial months of the pandemic, and South Africa took the opportunity to procure and manufacture Covid-19 supplies locally. The manufacture of medical-grade face masks, for instance, doubled month on month, offering local manufacturers an unforeseen business opportunity.

The Minister has also been driving the development and finalisation of departmental master plans, which are key to the revival of industry and feed into the president’s Economic Reconstruction and Recovery Plan (ERRP). The ERRP maps out the government’s plan to stabilise and build the country’s economy following the downturn caused by the pandemic and aims for increased localisation for reindustrialisation and growth.

Just some of the industries that have seen master plans finalised include the vehicle production, sugar, poultry, and clothing and textile industries. Master plans of the furniture and steel industry are also in development. These master plans are expected to support SMMEs, adding to job creation. He has also championed the creation and growth of special economic zones (SEZs) and industrial parks.

Minster Patel has been outspoken about his goal of getting South Africa to reach a R1.2-trillion investment target within five years, and he has been focused on continuing the momentum of investments made in 2018 and 2019 despite the pandemic. This investment will continue to be a focus for the DTIC as the African Continental Free Trade Area Agreement comes into effect.

The Trade, Industry and Competition Minister has been outspoken about his goal of getting South Africa to reach a R1.2-trillion investment target within five years, and he has been focused on continuing the momentum of investments made in 2018 and 2019, despite the pandemic.

He has also been an advocate for Black Economic Empowerment (BEE) policies, saying the current policies require review to ensure they benefit a wider segment of society. He has committed to establishing a review panel for this task.

Another key department in securing growth for the economy is the finance ministry, through monitoring government spending and making funds available to bolster employment and support businesses affected by Covid-19.

Finance Minister Tito Mboweni has been at the helm of the country’s financial performance in what may have been one of its most challenging economic climates. The Covid-19 saw a global economic downturn, bringing with it an increased unemployment rate in South Africa and the urgent reprioritising of the budget to fight the pandemic.

Minister Mboweni was instrumental in launching the R500 billion Covid-19 relief package. The package, which was announced once Covid-19 started to spread in South Africa, is one of the largest in Africa. The finance minister has a reputation for working well with Treasury, the South African Reserve Bank and South African Revenue Service, and the package was evidence of this good relationship. He also announced a R200 billion guaranteed loan scheme for small and medium enterprises.

But the challenges of his position were evident even before the global pandemic.

Minister Mboweni inherited a national fiscus that had been drained by poor management, corruption and a rocky relationship with trade unions. However, he has successfully negotiated a number of loans with organisations such as the International Monetary Fund and has stood firm in the face of trade union pressure.

The finance minister has been outspoken in his views on reviewing labour laws to encourage economic growth and as well as reforms like a global corporate minimum tax. As the Minister of Labour from 1994 to 1998, Minister Mboweni is well placed to navigate the demands of industry and the needs of the public sector.

While the country focuses on its post-pandemic recovery plan; it will need to find solutions to environmental pressures and as the government grows the economy. Carrying this burden is Environmental Affairs Minister Barbara Creecy. Her mandate includes reducing the impact of climate change, restoring the ecosystem and ensuring economic inclusion.

As well as the pandemic, over the last year, the country faced the ever-present effects of climate change with several areas experiencing drought and wildfires. But Minister Creecy has continued to drive the country’s response to climate change.

This has culminated in a new set of ambitious climate change goals, with the government planning to generate more than 17 gigawatts of renewable energy by 2030 and plans to have no new coal plants built after 2030 and slash the country’s carbon emissions by 2025.

The work of the department goes hand in hand with the economic reforms, and Minister Creecy has aimed to create more than 16 000 jobs in a year, as well as make R1 million in funding available to support young green entrepreneurs. She has also focussed on the fishing industry, awarding 15-year fishing rights to small fishing co-operatives in the Western Cape.

The Environmental Affairs Minister has become known for championing waste management, having proposed to have plastic carrier bags made entirely of recycled material by 2027, prioritising the circular ­economy and pushing new regulations for the management of waste.

As South Africa’s top diplomat, International Relations and Cooperation Minister Naledi Pandor’s work is essential in securing the country’s place on the global stage. How the country is viewed by, and its relationship with, other nations, can have far-reaching implications on trade agreements, foreign investment and financial rankings.

Her department has facilitated South Africa holding a chair as a non-permanent member of the United Nations Security Council, as well as the seat of chairperson of the executive council of the African Union, a challenging post as the continent grappled with the pandemic and sought to implement Joint AU Continental Strategy to contain the virus and the establishment of the Africa Covid-19 Fund. The Fund offered additional financial support to boost the capacity of the Africa Centre for Disease Control and Prevention.

Minister Pandor recently travelled to Italy to represent the country in meetings with other G20 foreign ministers, where global strategies to combat the Covid-19 pandemic have been a key topic.

South Africa, with Minister Pandor at the right hand of President Ramaphosa, has led the way in negotiating access to Covid-19 vaccines for developing nations, as well as lobbying for a temporary waiver of intellectual property rights for Covid-19 vaccines and treatments.

The department has negotiated several treaties and trade agreements, furthering South Africa’s footprint on the continent and in Asia.

“We are working hard to raise South Africa’s global visibility, promoting our strengths as the best place to be, to do business, to visit, to work, to study and to live,” said Hon. Pandor.

Each of these ministers may have a very specific role to play in South African politics, but their individual parts add up to a united front in revitalising South Africa’s economy and creating new opportunities for economic growth.