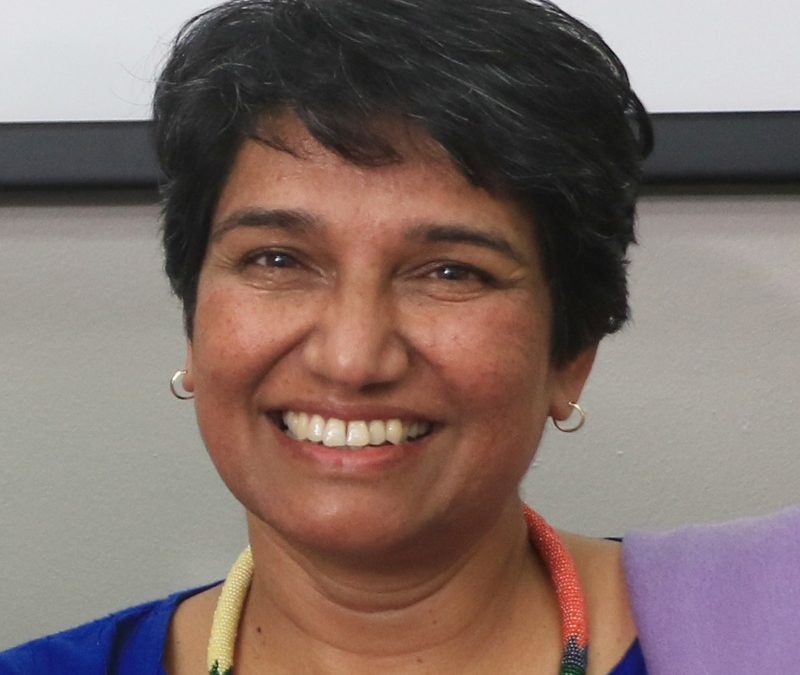 The Coronavirus pandemic has laid bare many persistent gender inequalities in the workplace, and unequal labour conditions have the potential to further reduce the role women play in the economy.

However, activists such as Dr Pregaluxmi Govender have been fighting to create an equal playing field in the workplace, for decades, harnessing the power of education and unions to promote gender equality.

Dr Govender is a feminist activist and author, renowned for her work in advancing women’s rights. She has been featured in the 21 Icons project, which aimed to capture human achievement through photography, film and narratives, inspired by Nelson Mandela.

She was born in Cato Manor, Durban in 1960, and was heavily influenced by her father, radical playwright Ronnie Govender. Her activism began in the late ’70s and early ’80s when she began her education in feminism, socialism and solidarity through student and women’s movements.

Dr Govender began her mission to educate after her graduation in 1981 when she worked as a high school teacher and then at the University of Durban-Westville (now University of KwaZulu-Natal). As much as she loved helping her pupils discover their potential, Dr Govender left teaching to focus on the trade union movement.

She joined the majority-women clothing union GAWU (now SACTWU) in 1987 and was appointed as national educator. Her programme saw a significant increase in the number of women elected to leadership positions.

In the early ’90s, Dr Govender had moved to a new project to uplift and empower workers – she founded a model workers’ college supported by the independent trade union movement. The Worker’s College at the University of the Western Cape produced worker leader graduates, with a focus on promoting non-racialism and gender equality.

She continued to motivate for women’s rights, and as a member of the Women’s National Coalition managed the Women’s Charter of Effective Equality campaign, which mobilised around two million women to ensure women’s rights were represented in the South African constitution.

This grounding in the fight for women’s rights Dr Govender took with her when she was elected into the Parliamentary Cabinet of the ANC in 1994.

Dr Govender took up the role as Chair of Parliament’s Women’s Committee and was key in pushing feminist and transformative legislation – this included legislation such as the Domestic Violence Act, the Customary Marriages Act, the Child Maintenance Act and changes to labour laws advancing women’s rights in the workplace. In 2002, she resigned from Parliament after being the only ANC MP to oppose the arms deal.

While Govender’s activism may have been born out of the inequalities of apartheid, it is no less relevant 28 years after democracy. Gender-based discrimination and inequalities are still prevalent in workplaces and have been brought sharply into focus through the pandemic. For the passionate activist and unionist, the violence and poverty faced by many women in South Africa remains a deep concern.

“There is this sense of dominance within which women and children, both girls and boys, are the invisible victims of hidden forms of violence,” she said.

Dr Govender’s grounding in the trade unionist movement forms an essential background for the fight against inequality. Unions play a vital role in challenging gender discrimination, promoting inclusive wage setting, and reducing the gender pay gap. Trade unions have a key role to play in promoting gender equality in the world of work by challenging the status quo of gender roles in the workplace. Many of them are doing so by incorporating a gender perspective into their work and, as a result, their activities are actively contributing to the achievement of gender equality The Covid-19 crisis has seen a significant number of women working on the frontline in various roles, as well as trying to balance family responsibilities during lockdowns.

McKinsey’s Women in the Workplace report found that women – and especially women of colour – have been negatively impacted by the pandemic and are more likely to have been laid off or furloughed.

Before the pandemic, research had shown that women and men left their jobs at the same rate. However, now more than one in four women are considering leaving the workforce as a result of the challenges created by Covid-19. This means companies risk losing current and future women leaders.

The pandemic has brought into sharp relief many inequalities experienced in our society, especially those faced by women. However, the work of passionate activists such as Dr Govender and unions in the workplace, are gradually breaking down these systemic barriers.