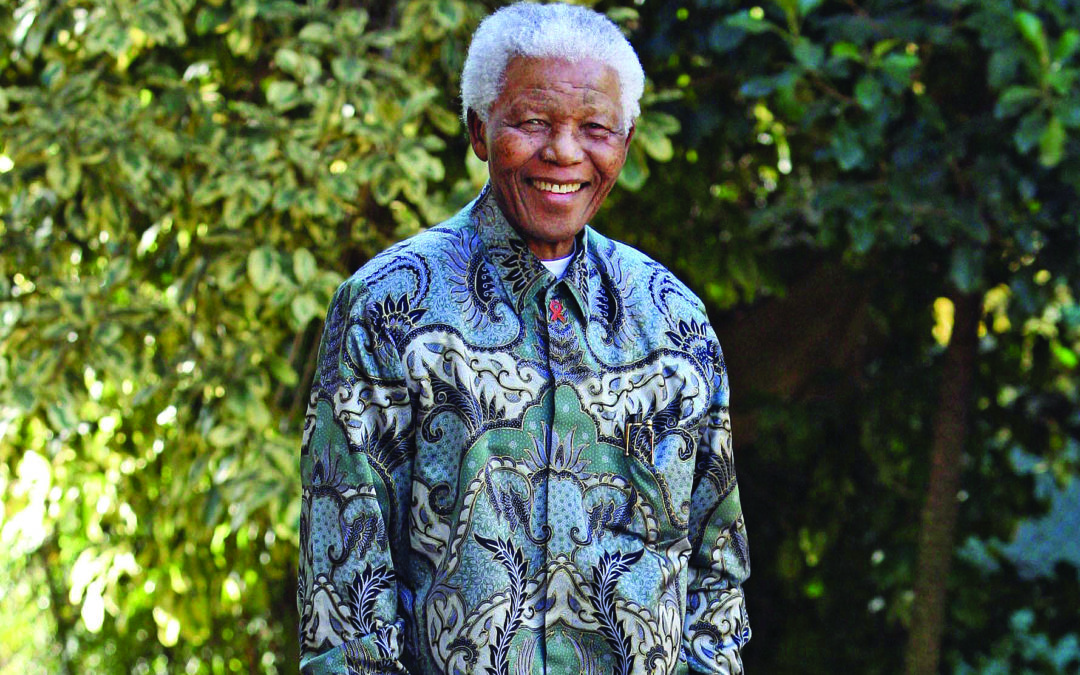 Fashion, some believe, is a frivolous affair. Others understand, as Mark Twain did, that clothes make the man.

Nelson Mandela truly believed in the power of clothes. From his days as a student at Fort Hare University, and as a young lawyer working in Johannesburg, to when he danced with Queen Elizabeth II wearing a distinctive black silk shirt, Mandela understood that “clothes can be a strategic expression of individuality, even for a politician.”

His close friend, comrade in arms and co-founder of the ANC Youth League Joe Matthews recalled Mandela and his cousin Matanzima’s dress sense in an interview with John Carlin on PBS’s Frontline. He said they were “tall, handsome Thembu gentlemen, always well-dressed … they were very striking, even as young men.”

Later, Matthews was to share a room with Mandela (he was expelled from Fort Hare in 1940 and moved to the then Transvaal in 1941) in Johannesburg. As young men, they threw their lives into the struggle for South Africa’s freedom. Even then, said Matthews, Mandela was “meticulous” about his clothes. “What I can tell you is that a white silk shirt on Nelson Mandela is different from a white silk shirt that we have. His is really white, and yours is not quite the right white. He is a meticulous dresser and he picks his clothes, so it means he gives it thought. Whereas most of us, you go into a shop, you buy a suit.”

Matthews said even when Mandela was “supposed to be casually wearing a khaki trouser, it would be a ‘khaki’ trouser. It wouldn’t be gabardine. It would be the genuine thing.” Matthews was mystified as to how Mandela had become so clothes conscious. “Where he picked it up, I don’t know, because you wouldn’t regard Transkei as the kind of environment in which people would be looking out for the best kind of clothes. I think it’s just a characteristic of his, and maybe it reflects a kind of ego as well, wanting to be the best dressed”, he told Carlin.

Another late comrade from those years (and the advocate who was Mandela’s legal adviser), Sir Bob Hepple, recalled how when Mandela arrived in court for the Rivonia Trial, he was wearing tribal dress, including a kaross, a bead necklace and the green, gold and black colours of the African National Congress.

“My reaction was that of a white left-winger who viewed tribal dress with suspicion. This, I thought to myself, is how the Afrikaners want to portray Africans: as still living in a tribal state and not as citizens of a modern, industrial society.” Hepple came to realise later that it was Mandela’s strategic mind at play. Not only did his choice of clothing show a “sign of contempt for white justice”, as he wrote in Long Walk to Freedom, but it also showed his comrades the ANC wasn’t under the domination of “white communists.”

When Mandela walked out of jail on 12 February 1990, he was wearing a dark grey suit, white shirt and grey tie. It was made by his trusted tailor, Yusuf Surtee, whose father had owned Grays where Mandela bought his suits in the 1950s. Surtee had received a phone call: “He told me: ‘I’m going to be released soon and I need a suit and some shirts.’”

And suits and shirts are what he wore… for a while, until the world-famous ‘Madiba shirt’ came into being and stayed as a long-term testament to the former President’s style.

“Fortunately, by 1994, Mandela had not only rediscovered his fashion sense, but after an encounter with the then Indonesian president, Suharto, who was partial to patterned shirts, he evolved a signature style that not only rallied against the conventions of his presidential appointment and position, but expressed a new identity befitting the new nation he had helped birth,” wrote contemporary African art specialist, Mary Corrigall, in a piece for the Sunday Independent.

After Mandela died in December 2013, former Vice President of Indonesia Jusuf Kalla credited him with making batik designs internationally famous. “He dared to wear batik in the UN chamber. If it was me, I would hesitate to wear batik and speak in the UN General Assembly, but he did not.”

How the Madiba shirt came about has its genesis in several stories. In 1994, Cape Town shirt designer Desre Buirski heard Mandela would be visiting her synagogue in Cape Town. She wanted to give him something to thank him for the sacrifices he’d made for South Africa. She found a shirt she’d made, black with gold and cream patterns, extra large with long sleeves. She thought to herself, if he didn’t wear it, he could give it away. After wrapping it up and writing a note, she managed to give it to one of Mandela’s bodyguards. A short while later, a friend called to tell her a photograph of Mandela wearing her shirt at the practice for his inauguration had appeared in the newspaper. And so the relationship began. She was responsible for the iconic black silk shirts Mandela wore to meet the Queen.

Sonwabile Ndamase was another of Mandela’s shirt designers who had made clothes for Winnie Mandela and was introduced to Madiba by his daughter Zindzi. Ndamase recalls Mandela saying, “A Pondo who designs clothes? Ah, what can you do for me?”

He gave Ndamase a few guidelines, including that the shirt should not be a dashiki, as worn by OR Tambo, and should be light and distinctive. “Tata’s lung illness meant I would have to design something that was not too heavy, yet still dignified, that he could wear in formal meetings at top government level. I then designed a shirt made from limited edition African- inspired prints to be worn over slacks, something stylish without being stifling.