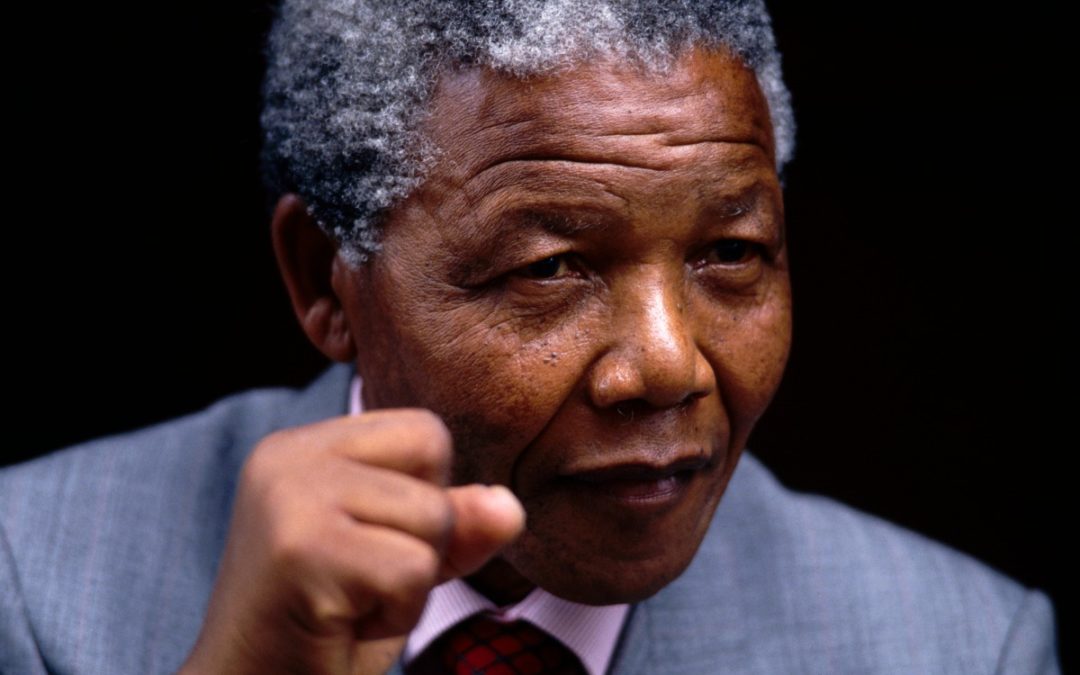 “Democracy has taken root in our country and in our region, and with it have come peace and political stability. But all this will be little more than the shifting sands of illusion, if we do not take decisive measures to strengthen the moral fibre of our nation.” – Nelson Mandela

In his closing address following the debate on his State of the Nation Address (SONA) in February 1995, Mandela said: “The threat that corrupt norms implanted by apartheid may survive and overwhelm us as we set about building on new values, is one that alarms us. It is a threat that, as a government, we are determined to forestall. The Cabinet is finalising a Code of Conduct for its members, a code that shall be firmly applied.

“However, if the sanctions against corrupt practices are not carried out in every corner with equal fervour – government and civil service, political parties, private business and non-governmental organisations – this scourge will remain with us.”

It’s worth noting that Mandela understood that the inherited system had seeds of corruption, which, if not rooted out, were bound to poison the future. He also understood that corruption was linked to ethical lapses and that members of the executive were not immune to it, hence the prioritisation of the Code of Conduct for Cabinet members.

This is in contrast to anti-corruption pronouncements and efforts at the highest political level in the last few years. Such pronouncements and efforts have tended to focus on the conduct of public officials with concomitant measures incorporating the prohibition of public servants from doing business with the state. As Public Protector for seven years, I was exposed to a lot of looting of state resources through proxies and kickbacks that include donations to organisations and foundations linked to politicians or their family members or partners.

As evidenced in his address to the Business Initiative Against Crime, Mandela understood that impunity undermines anti-corruption efforts. Linked to this was his appreciation that corruption is a systemic problem that pervades all areas of society; hence, the clean-up process must cover every corner or the battle would be lost.

During his presidency, the predecessor of the Hawks, the Scorpions, did exactly what Mandela promised. It ensured that corruption was cleaned out from every corner and sanctions against it were carried out with equal fervour. The National Prosecuting Authority (NPA) and the Scorpions netted a number of crooked politicians, earning enemies in the process. This eventually led to a smear campaign against Mandela’s appointee, Bulelani Ngcuka, the first National Director of Public Prosecutions (NDPP) in democratic South Africa.

Having taken to his job enthusiastically and tackling each corruption allegation without fear or favour, Ngcuka was branded a spy – a strategy used more frequently recently to attempt to delegitimise administrative anti-corruption agencies and judicial officers. The investigation against him by a commission of inquiry yielded inconclusive results. This, I believe, favoured the information peddlers as it left the public in doubt, thus diminishing his credibility. Though evidence showing conclusively that the information was false surfaced later.

I would be remiss if I didn’t mention two incidents that are often cited as ethical lapses on the part of Mandela regarding the quest against corruption. The one is the firing of General Bantu Holomisa from his post as a Deputy Minister after whistleblowing against the Cabinet Minister Stella Sigcau regarding alleged corruption while she was still in the former Transkei administration. The other is the Sarafina! scandal involving the irregular issuing of a multimillion AIDS awareness contract by the Department of Health to the producers of the iconic anti-apartheid movie.

Regarding the Sarafina! matter, the criticism may be warranted if we apply integrity rules in mature democracies. In such cases, a whiff of a scandal is usually enough for the captains of institutions to fall or be encouraged to fall on their own swords.

It is my considered view that in this case Mandela deferred to the law enforcement processes and when these did not assign blame to the captains involved, there was no room for him to act. We also have to take into account that although firm, Mandela was a compassionate leader. In this case, he may have taken into account that the Minister and Director General concerned were new and novices on what was and was not permissible regarding public procurement.

On the Holomisa saga, it is my belief that Mandela could have handled the matter better and more in line with his undertaking in the SONA of February 1995. Sadly, it is a common strategy for organisations to seek to protect their brand or ‘upright image’ by leaning on opacity.

I remember a complaint lodged to my office as Public Protector by a former councillor who had been dismissed by his party for whistle-blowing to the media about what he regarded as corruption by the chairperson of his political branch. The wrongdoing, which was eventually confirmed by the Public Protector, involved rushed foreclosures on council debtors with small debts, then auctioning their land or other immovable property for a song, with the council debt collector and lawyer’s business partner buying such properties, reselling them at market value and making enormous profit. In the end though, the brand suffered damage not because of the whistle-blowing but because of the failure to arrest apparent corruption.

The reaction by the Executive and Parliament to the opulent and irregular expenditure of a quarter of a billion rand on aesthetical improvements to former President Jacob Zuma’s private homestead in Nkandla is an example of a mixture of a clumsy attempt at brand protection and misplaced loyalty. The result was an epic tongue lashing by the Constitutional Court in a seminal judgement delivered by Chief Justice Mogoeng Mogoeng in the EFF v the Speaker of the National Assembly. Needless to say, the brand was dented significantly.

When it came to his own accountability as a state functionary, Mandela resolutely sought no special treatment. He was willing to comply fully even if the experience appeared humiliating. This was the case when he was personally hauled before Pretoria High Court and presented himself for alleged interference in rugby administration.

His philosophy in this regard is apparent in his globally celebrated assertion that: “Even the most benevolent of governments are made up of people with all the propensities for human failings. The rule of law as we understand it consists in the set of conventions and arrangements that ensure that it is not left to the whims of individual rulers to decide on what is good for the populace. The administrative conduct of government and authorities are subject to scrutiny of independent organs.

Amongst those are the Public Protector, the Human Rights Commission, the Auditor-General, the Independent Electoral Commission, the Commission on Gender Equality, the Constitutional Court and others.

“It was to me never reason for irritation but rather a source of comfort when these bodies were asked to adjudicate on actions of my government and office and judged against it. One of the first judgments of our Constitutional Court, for example, found that I, as President, administratively acted in a manner they would not condone. From that judgment my government and I drew reassurance that the ordinary citizens of our country would be protected against abuse, no matter from which quarters it would emanate. Similarly, the Public Protector [Ombudsman] had on more than one occasion been required to adjudicate in such matters.”

Mandela refused to behave like an absolute monarch or pharaoh whose actions are beyond public scrutiny. It is said that the fish rots from the head down. The tone Mandela set for anti-corruption and integrity was clear and devoid of ambiguity. We all knew that clean government is what was expected from all, not just some of us, and followed the lead.

On a personal level, Mandela oozed integrity, which is essential for combating corruption. An authentic leader who said what he meant and meant what he said, I had the privilege of serving under his leadership and interacting with him during the Constitution drafting process, both as one of the 11 Technical Advisers to the National Assembly and, much earlier, when we initially advised the ANC on the Constitution as a Wits University cohort led by Firoz Cachalia and part of a local government advisory group that drove local government transition legislation under the leadership of Dr Mathole Motshekga.

In September 1995, I joined the public service through the Department of Justice under the leadership of Advocate Dullah Omar, whose values were very much attuned to those of Mandela. I can say without fear of contradiction that there wasn’t a single issue of corruption. To be honest, scandals remained an oddity and not a norm throughout Mandela’s presidency.

Mandela was particularly conscious that his organisation was there to introduce and uphold higher standards and that it was not open for him and his colleagues to benchmark or justify their conduct on the impugned standards and conduct of their apartheid predecessors. In 2001, he accordingly said: “Little did we suspect that our own people, when they got a chance, would be as corrupt as the apartheid regime. That is one of the things that has really hurt us.”

I wonder what Madiba, as we fondly called Mandela, would say about the national governing party’s initial hesitancy to investigate state capture until the Public Protector’s “State of Capture” report – and the ground lost due to the delay.

What would he make of the fact that those implicated in looting during the systemic state capture years continue to live luxurious lives freely while poverty has shot to 50.5%, unemployment to more than 27% and the health system is falling apart? What would he do in response to the fact that the hungry and angry masses are unleashing their anger on the very limited infrastructure for their transport, education, health and other essential needs?

Where would he stand on the land question and land expropriation without compensation being dangled before the poor as a diversion and an illusory promise to break the poverty cycle without a comprehensive overhaul of land reform and anti-poverty strategies? What would he say about politicians implicated in state capture who continue to be allowed to peddle lies that they are persecuted for land reform and other transformation issues that they only started talking about after the state capture investigation?

In his famous ‘Make Poverty History’ speech, Mandela warned about the importance of ending poverty. Recent developments have proved that we must deal with social justice to foster uprightness, as the prevalence of social injustice is leveraged by the thieves who lean on the very public they steal from for support. This we saw happening during the state capture investigation.

As we celebrate a hundred years of Mandela, the best tribute we can pay to him and the colleagues with whom he put (and left) our country on the pedestal of hope, is to sustain that pedestal of hope and raise it even higher. To do so, we must ensure that democracy works for all. Democracy can’t work for all where there is corruption, as corruption corrodes all that is good, particularly social justice and the rule of law.

If we falter, not only will we fail those who gave us the gift of democracy, but all will, as Madiba warned, amount to “a little more than the shifting sands of illusion” because as long as some are not free, none can be truly free. I have faith though that the worst years regarding corruption are behind us and that tomorrow will be better than today.