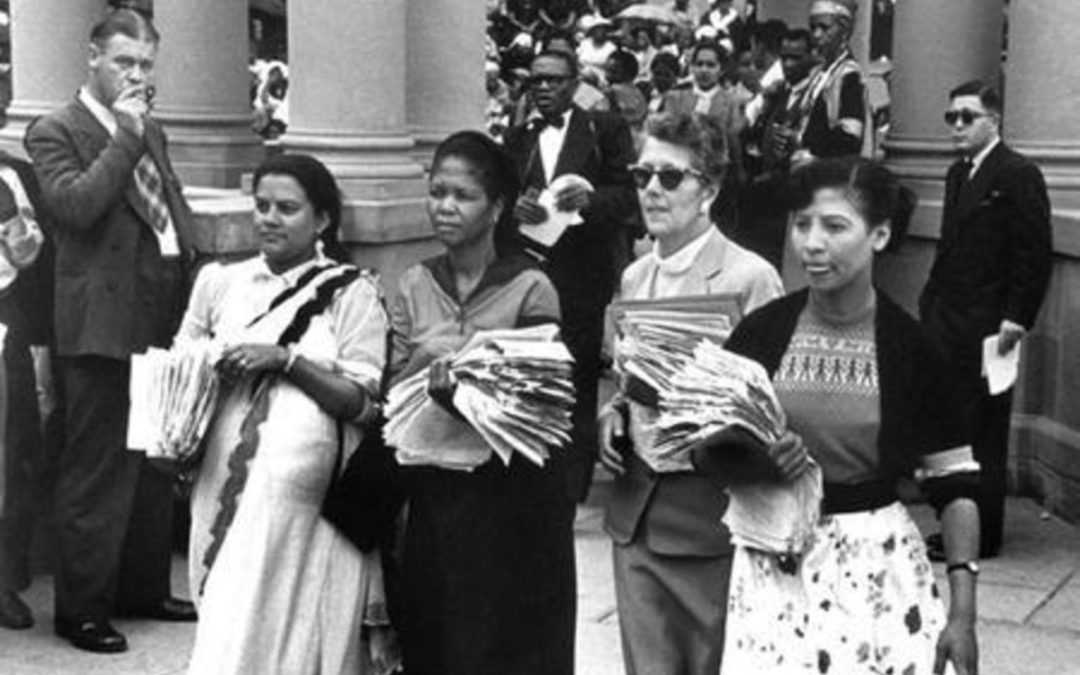 On 9 August 1956, 20 000 South African women from all walks of life broke the apartheid barriers and marched to the Union Buildings to protest the pass laws. This year marks the 65th anniversary of this historic event.

“We, the women of South Africa, have come here today. We represent and we speak on behalf of hundreds of thousands of women who could not be with us. But all over the country, at this moment, women are watching and thinking of us. Their hearts are with us.

We are women from every part of South Africa. We are women of every race. We come from the cities and the towns, from the reserves and the villages. We come as women united in our purpose to save the African women from the degradation of passes.” – Excerpt from the petition presented to the Union Buildings on 9 August 1956.

Lillian Masediba Ngoyi was born in Pretoria in 1911; she schooled in Kilnerton and enrolled as a trainee nurse, but in 1945 started as a machinist in a clothing factory, where she worked for 11 years. During this time she joined the Garment Workers Union, and the African National Congress (ANC). She was arrested during the Defiance Campaign for using

“whites-only” facilities in a post office. In 1951 Lillian was elected as president of the ANC Women’s League.

The year 1956 was a momentous one for Lillian – she became President of the Federation of South African Women, organised and co-lead the Women’s March in August, was the first woman to be elected on the ANC National Executive Committee and in December was arrested for high treason. With 156 other stalwarts, she was one of the Rivonia trialists –the “treason” trial that lasted until 1961.

Sophia Williams de Bruyn was born in 1938 in Village Board, Port Elizabeth. During school holidays she used to work at a textile factory and eventually joined full time, becoming an executive member of the Textile Workers Union, together with Raymond Mhlaba and Govan Mbeki. She became a founding member of the South African Congress of Trade Unions (precursor to COSATU).

In 1955 Sophia was appointed full-time organiser of the Coloured People’s Congress in Johannesburg and in 1956, at the age of 18 organised and co-lead the Women’s March to the Union Buildings in Pretoria.

As the surviving leader of the March, she continues to be a passionate activist and in February 2016 urged President Zuma to focus on the issue of racial cohesion in the country.

Rahima Moosa was born in the Strand, Western Cape, in 1922 and attended Trafalgar High School, which she left at the age of 18 to work in a factory.  Inspired by Marx and Gandhi, at the age of 21 she became a shop steward for the Cape Town Food and Canning Workers Union. In 1951 she married Rivonia Treason trialist Dr Hassen “Ike” Mohamed Moosa.

When Rahima moved to Johannesburg with her husband she joined the Transvaal Indian Congress and in 1955 played a significant role in the organisation of the Congress of the People where the Freedom Charter was adopted. The following year, in the final stages of pregnancy, she helped organise, and together with Helen Joseph, Sophie de Bruyn, Lillian Ngoyi and Albertina Sisulu, led the March on the Union Buildings.

In the early 1960s Rahima was listed (banned from belonging to any of the listed 36 organisations); this status remained until the unbanning of the ANC in 1990. In 1970 she suffered a heart attack and 23 years later died at the age of 71, one year before the first democratic elections in South Africa.

Albertina Sisulu was born in Transkei, in 1918, as the eldest of eight girls. She is lovingly referred to as “Ma Sisulu” or the “Mother of the Nation” and is one of the most important and influential people in the anti-Apartheid movement.

After finishing school Albertina trained as a nurse in Johannesburg.  In 1944, she married Walter Sisulu and moved into a house in Orlando which would be their home for the next 45 years. For the following 15 years her husband was imprisoned eight times and whilst being the sole breadwinner of the household, she carried on the resistance.

In 1948 Albertina joined the ANC Women’s League and a few years later, assumed a leadership role. In the 80s she co-founded the United Democratic Front (UDF) which joined the multitude of anti-apartheid groups under one umbrella. She was elected one of its co-presidents from her jail cell.

Helen Fennell was born at the start of the 20th century (1905) in Sussex, England. She grew up in London and graduated with a degree in English from the University of London in 1927. Her first teaching post was in Hyderabad, India, after which she moved to Durban where she met and married dentist Billie Joseph.

During the Second World War (1939-1945) she served as an information and welfare officer in the Women’s Auxiliary Air Force. After the war she took a job with the Garment Workers Union and was a founder of the Congress Union of Democrats (COD), and became national secretary of the Federation of South African Women in the 1950s.

In 1955, Helen was one of the leaders who read out the clauses of the Freedom Charter at the Congress of the People and one of the organisers and leaders of the Women’s March on 9 August 1956. Arrested on a charge of high treason in December 1956, banned in 1957 and placed under house arrest in 1962, she endured many years of police persecution and assassination attempts.

Helen was diagnosed with cancer in 1971 and passed away on 25 December 1992 in Johannesburg. She was buried in Avalon, the same cemetery as Lillian Ngoyi. In the year of her passing, she was awarded the ANC’s highest award, the Isitwalandwe/Seaparankoe Medal for her devotion to the liberation struggle. Isitwalandwe means “one who wears the plumes of the rare bird” and the award is bestowed upon only the bravest of warriors.